For a project manager, I am probably the worst planner ever. My decisions are mostly made of why-nots and I’ll figure it out laters.

A few months ago while waiting for my dinner, like many misanthropic millennials out there, I took out my phone and browsed around the Internet. A link lead me to an application form to attend TEDxUbud, which event is only limited to 300 participants. I thought, “Why not?” and filled the form up. 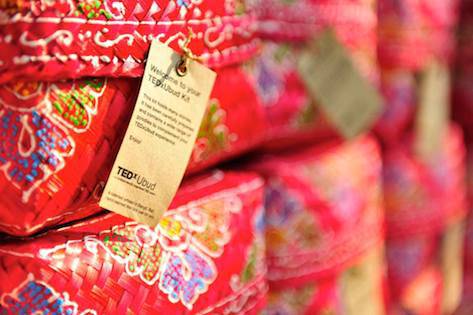 My dinner arrived, I stashed my phone away (because food is priority) and forgot about it.

Until a couple of weeks later, an email arrived in my inbox saying that my application has been approved!

So this is yet another why-not.  I booked my flight ticket to Bali in September and announced to the team I was going to represent Stampede at TEDxUbud. They first went “wha?” before going “yay!”

(My I’ll figure it out later was where to stay – but let’s not worry about that for now.) I arrived and beamed when I saw my name along with my designation and Stampede, on the name tag.

If we have spoken to each other before, you would have known how proud I am of Stampede and my team based on, but not limited to, these facts: 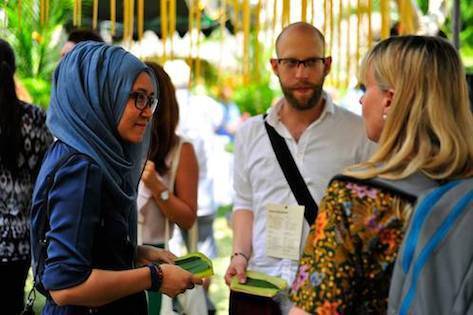 I spent the day circling around the crowd, getting to know each other and eventually introducing Stampede amidst my incessant demands of asking them to view our website on their devices.

I hope I am not being creepy. Moving on.

When Traditions and Technology Merge 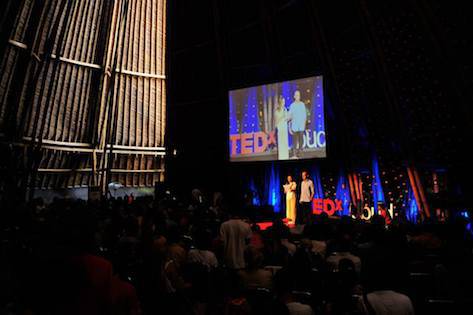 It was hard not to be inspired by all the speakers’ stories and achievements, honestly – they were all amazing.

I am a fan of design thinking and strategy, and all the possibilities design and technology could pave ways for dying traditions, so here are my two favourites. Seven years ago, Nancy Margried and her team at Batik Fractal met with one of the most respected batik designers in the country. They told him they were able to create batik patterns using a computerised math algorithm called jBatik software. They were sure he’d be excited about their idea and wanted to collaborate, but he ended their meeting by saying that batik and technology should never go together and that Nancy and her team were insulting batik as a sacred culture.

Fast forward to 2014 and Nancy and her team have been training more than 1000 batik artisans and students throughout the country. As a result, Batik Fractal are bringing older and younger generations together to learn from each other and collaborate not only to preserve batik as a cultural icon, but also to develop an industry that supports millions of batik artisans throughout Indonesia.

Nancy is glad that seven years ago she didn’t listen when she was told that batik and technology should not come together – even if the man who told her was a batik legend. Rizal Abdulhadi is a uniquely talented multi-instrumentalist, folk singer, and social activist from West Java, Indonesia, who has dedicated his music to struggle for real change and a more creative Indonesia and world. His latest project is called “Rasendriya”- an instrument he independently created from bamboo, combining guitar with didgeridoo and percussion. His lyrics, in both Indonesian and English, talk of travel, adventure, democracy, and opportunity.

Rizal spent over four years traveling and playing concerts through his homeland of Indonesia between the years of 2008-2012, since then traveling with his music through Singapore, Malaysia and Australia. His new album “Rizal and Rasendriya, Away” featuring his newly invented instrument and 5 musicians from Turkey, Czech Republic, Australia and Indonesia.

His energy is infectious – he simply brought the house down with his closing performance!

Those of Us In-Betweeners On top of the inspirational talks, what I also love most about the folks attending TEDxUbud is most of them are like me – perpetually in transit between many cities.

Late 2012, after moving temporarily to London, I made a pact to myself that I would travel as much as I could and probably will not stay in one place for a long time. Because I am greedy, I also decide to work while on the move. Being in Stampede gives me the flexibility to project manage my team in any cities I’d be staying.

This concept is popularised as the term digital nomad. I am skeptical of the term, but if that is what describes my current lifestyle, I would take it any day.

About TED, TEDx and TEDxUbud TED (Technology, Entertainment and Design) is a nonproﬁt organisation devoted to Ideas Worth Spreading. Started as a four-day conference in California 30 years ago, TED has grown to support those world-changing ideas with multiple initiatives. The annual TED Conference invites the world’s leading thinkers and doers to speak for 18 minutes. Their talks are then made available, free, at TED.com.

Created in the spirit of TED’s mission, “ideas worth spreading,” the TEDx (‘x’ stands for ‘independent’) program is designed to give communities, organisations and individuals the opportunity to stimulate dialogue through TED-like experiences at the local level. To date, more than 7,000 TEDx events have taken place all around the world.

Each year TEDxUbud features amazing lineup of Indonesian and international entrepreneurs, designers, storytellers, and performers sharing their ideas with a curated audience of 300 at Fivelements in Bali, Indonesia.

(P.S: With the exception of my big grin in the second photo, the rest of photos, and some of the words are reworded from TEDxUbud 2014 Official Facebook page. Thanks!)

(P.P.S: And if you are worried that if I ever did find a place to stay, it was actually pretty sweet!)