Being All Inspired at JomLaunch 3.0

It was a glorious, sunny Saturday as the three of us – me, Shaza and Dov – made our way to UKM Bangi to attend the third JomLaunch, organised by JomWeb community.

JomWeb, a Malay colloquial term for ‘let’s web’, is an initiative by the web and IT community of Malaysia to share and discuss ideas among likeminded people in the industry through a series of events, forum and Facebook groups, and many more.

JomLaunch (‘let’s launch’) is part of these initiatives, showcasing interesting web apps & startup ideas built by Malaysian entrepreneurs. The event involves short presentations where every project owner is given 10 minutes to talk about their project ideas as well as taking questions from the floor later. It was a really great event to catch up and network with Malaysian web and IT community and encountering a myriad of ideas. This third JomLaunch was especially even more special as it was done as part of the events for this year’s Malaysia Open Source Conference, or MOSCMY.

It was the perfect weekend to get all inspired. 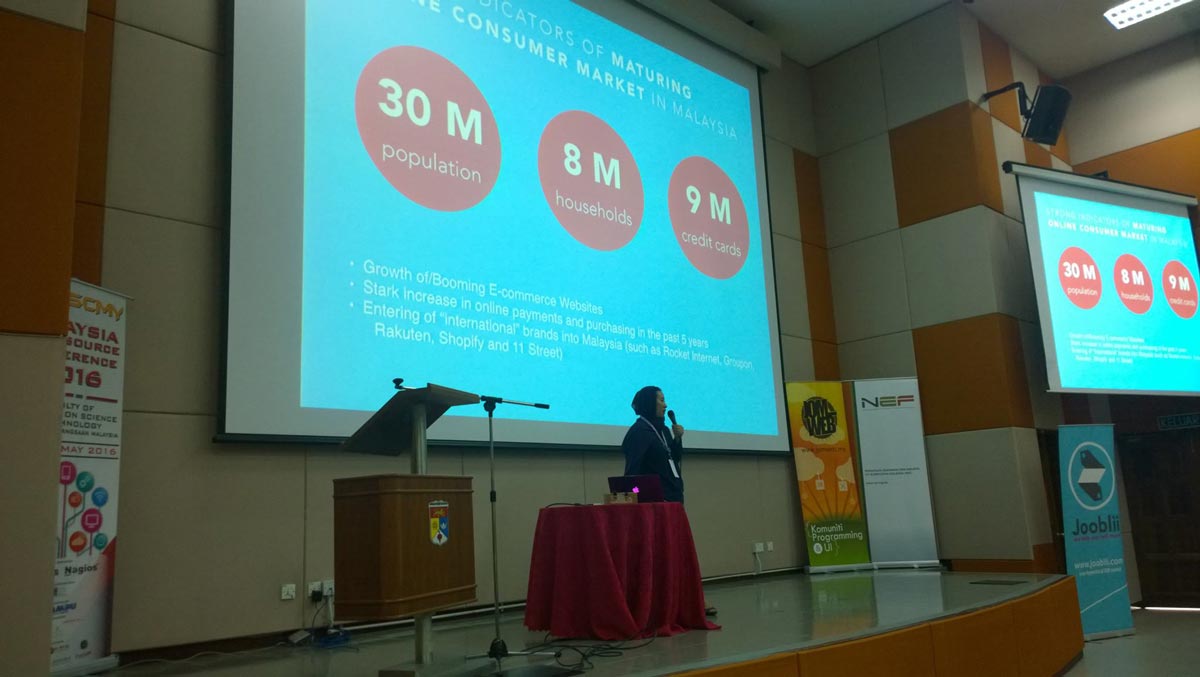 Jooblii is a marketplace and online business academy, especially targeted for B2B instead of B2C -think of Alibaba meets Lynda. The platform was created to help new businesses develop the proper skills they need. The project was presented by Lilyana Latiff, CTO for Aleph One and former Joota Product Manager and Co-Founder. Jooblii is also special to us since Stampede is not only present to the event in the capacity of UX team, front-end and programming – we also have our part as a shareholder for the project. Go Jooblii! 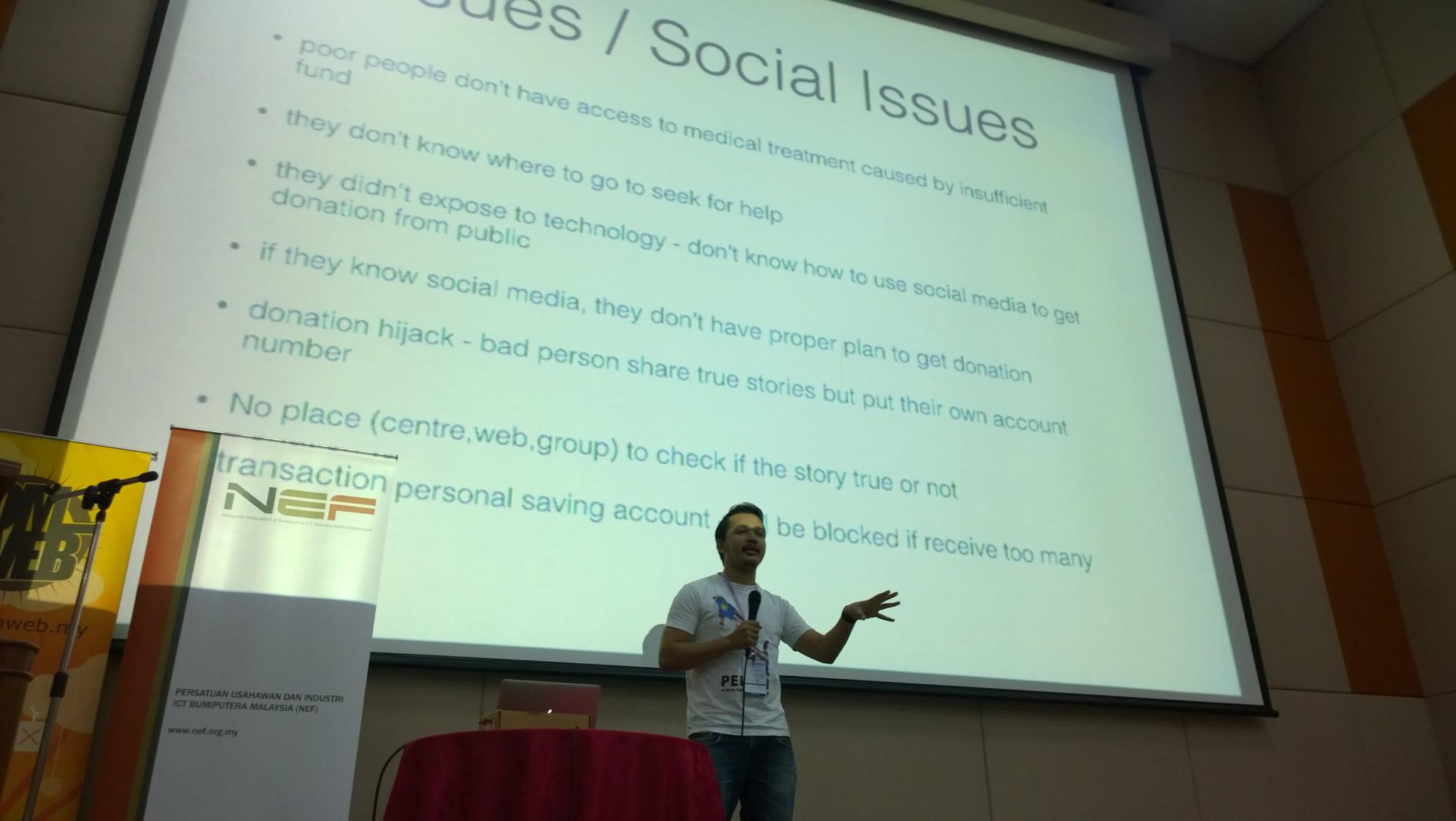 Tabungku is a crowdfunding platform for those in need of financial help to cover the medical costs. The founder, Shak Hassan, ran through a good list of problem statements  – among others, while Malaysians love to donate, but there had been no official, dedicated and trustworthy channel. Tabungku was created to serve as a donation platform, as well as to educate and coach people who are in need of donations on the proper channels to get them. 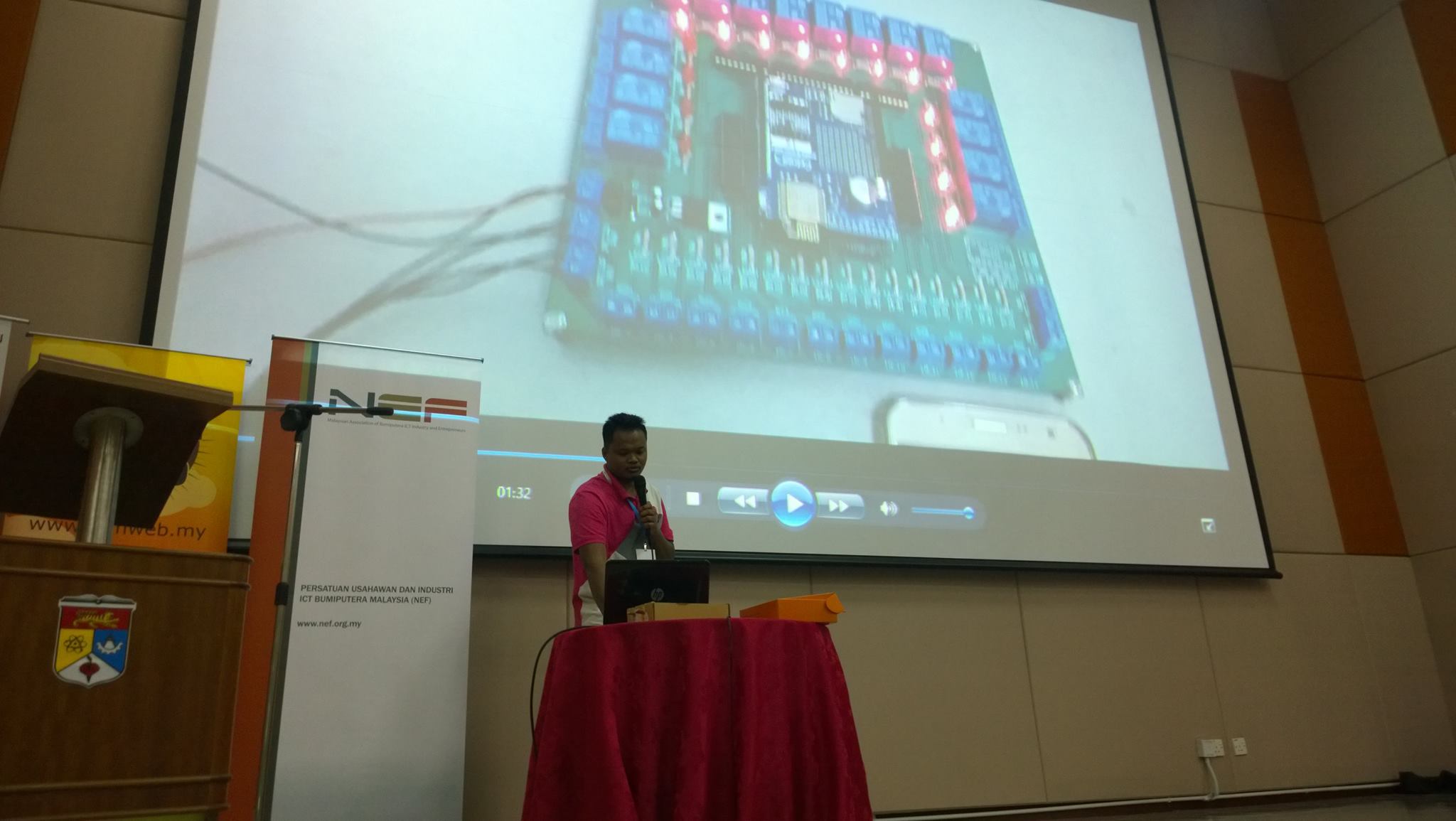 Probably the only hardware demo, IoT Switch is a smart switch containing 16 inputs and 16 outputs, where a signal will be pushed to the server and to a phone app. The signal can also be sent back to the board, hence bi-directional. An example of usage is you could install it at the window, and it can send you a signal when the window is opened. What’s even more amazing is the project owner, Shahrul Nizam, built the PCB board by himself. 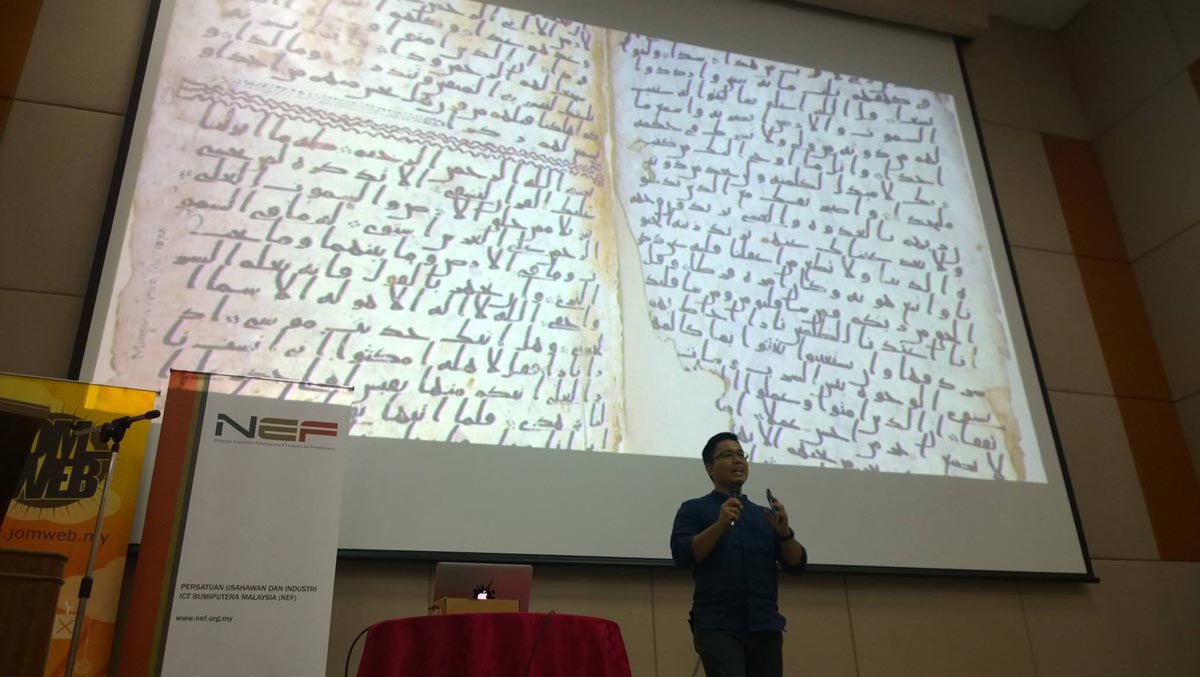 Hifz is an iOs app to aid Quran recited and memorization. Presented by serial entrepreneur, Azizi Khalid, who frequently commutes between Perth and Kuala Lumpur, he kicked off the presentation  by going through the challenges for Quran recitation – mainly the difficulty, how it’s time consuming and with steep learning curve, it is easy to feel demotivated. Upon signing up, users will be receiving daily lessons and goals, and verses can be hidden to test user’s memories. 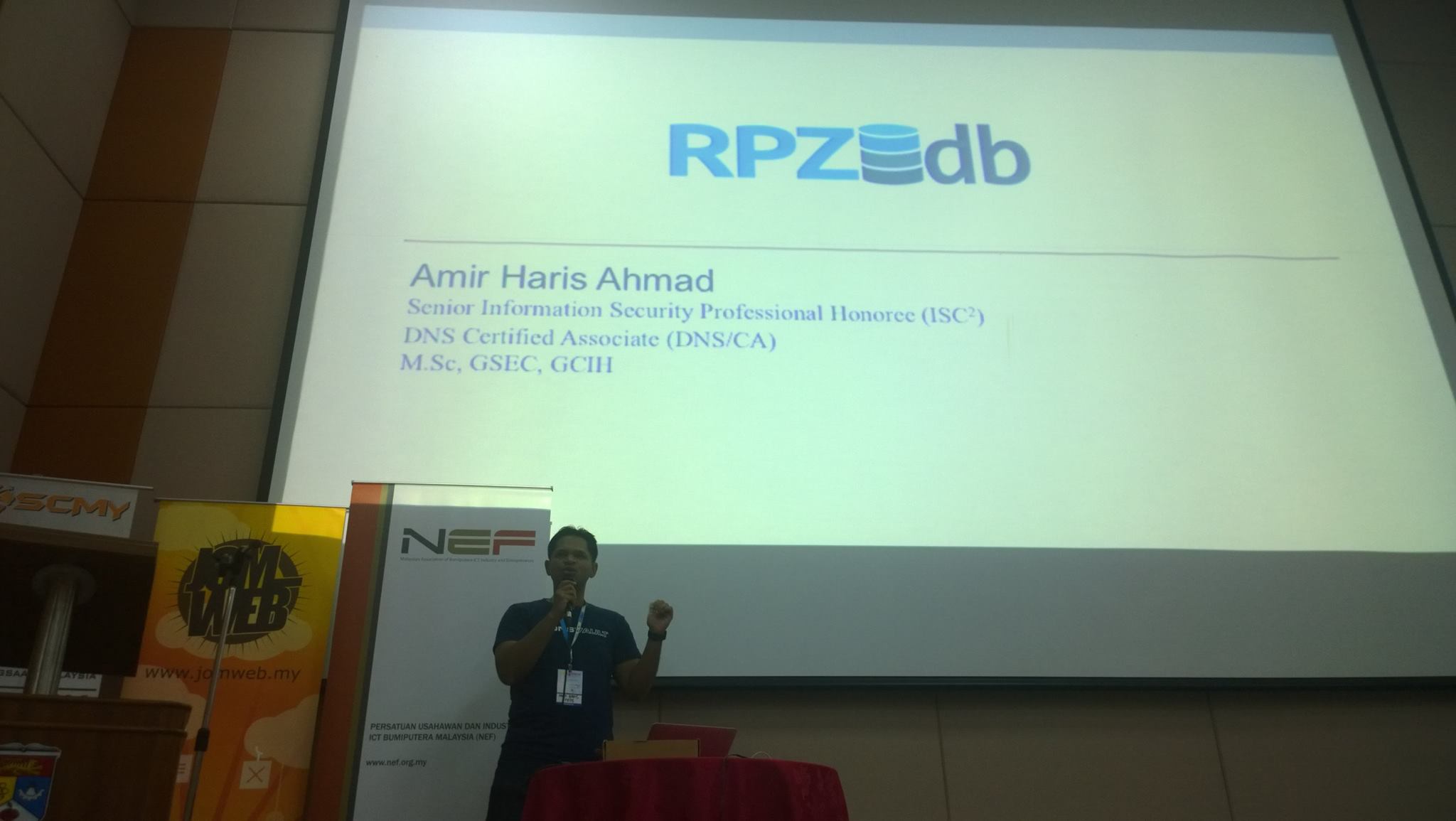 Amir Haris Ahmad is the go-to-guy when it comes to DNS expertise in Malaysia. One of his other projects, DNSVault is being used in colleges and ISPs in the country as well as abroad. In this Jomlaunch, he talked about RPZDB, a database for DNS servers to prevent users from accessing dangerous websites. 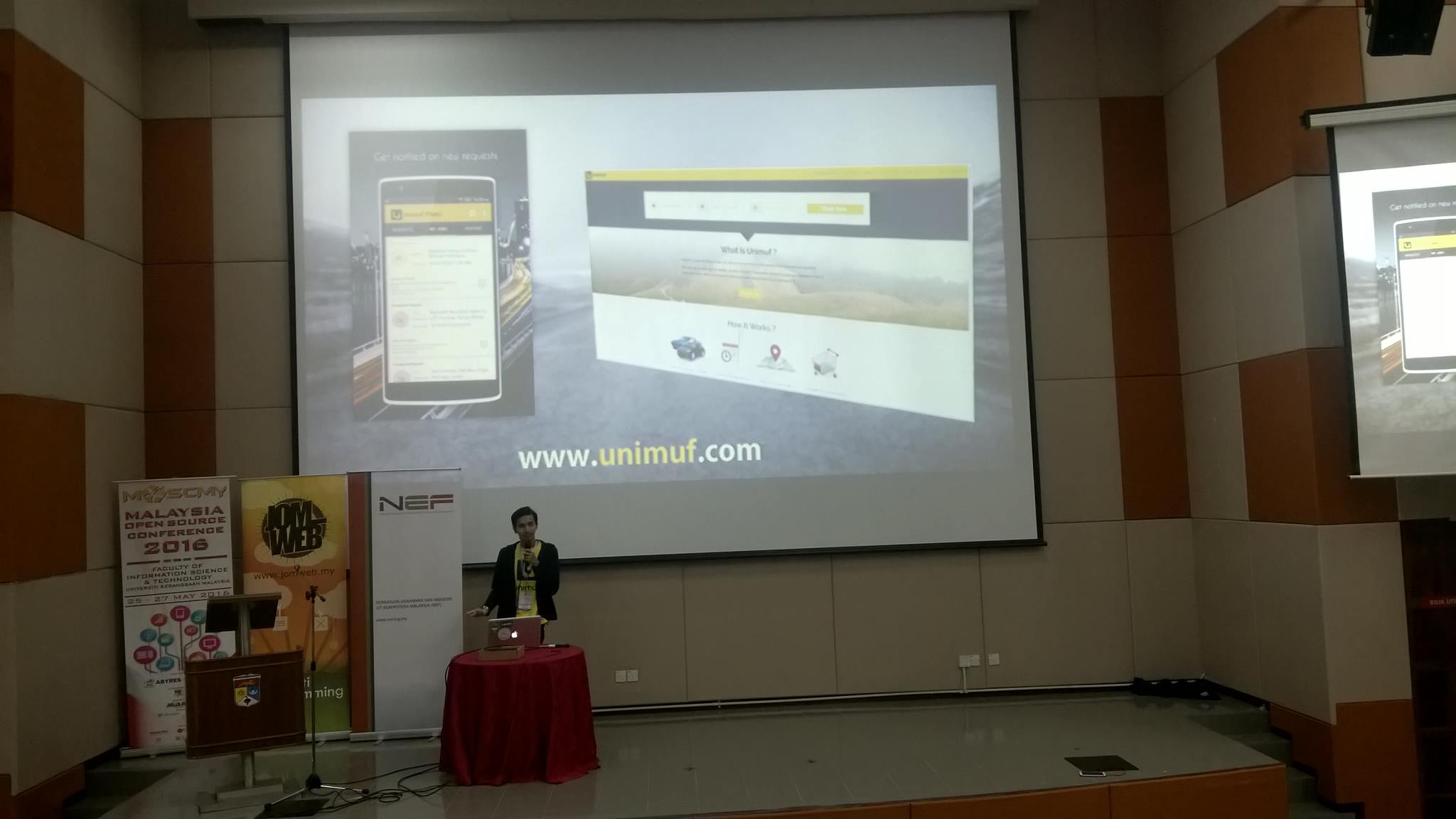 Recognising the needs for affordable rental cars for universities, Nadzri Sazali decided to come up with his own Airbnb for cars. Hence the birth of Unimuf, a peer-to-peer car sharing platform. Through Unimuf, it connects the owner of the cars and the users who wanted to rent the car through a simple and friendly interface. Unimuf also will connect users with transporters – those who will drive for you if you do not feel like driving. In the meantime, Unimuf is only available around Gombak. 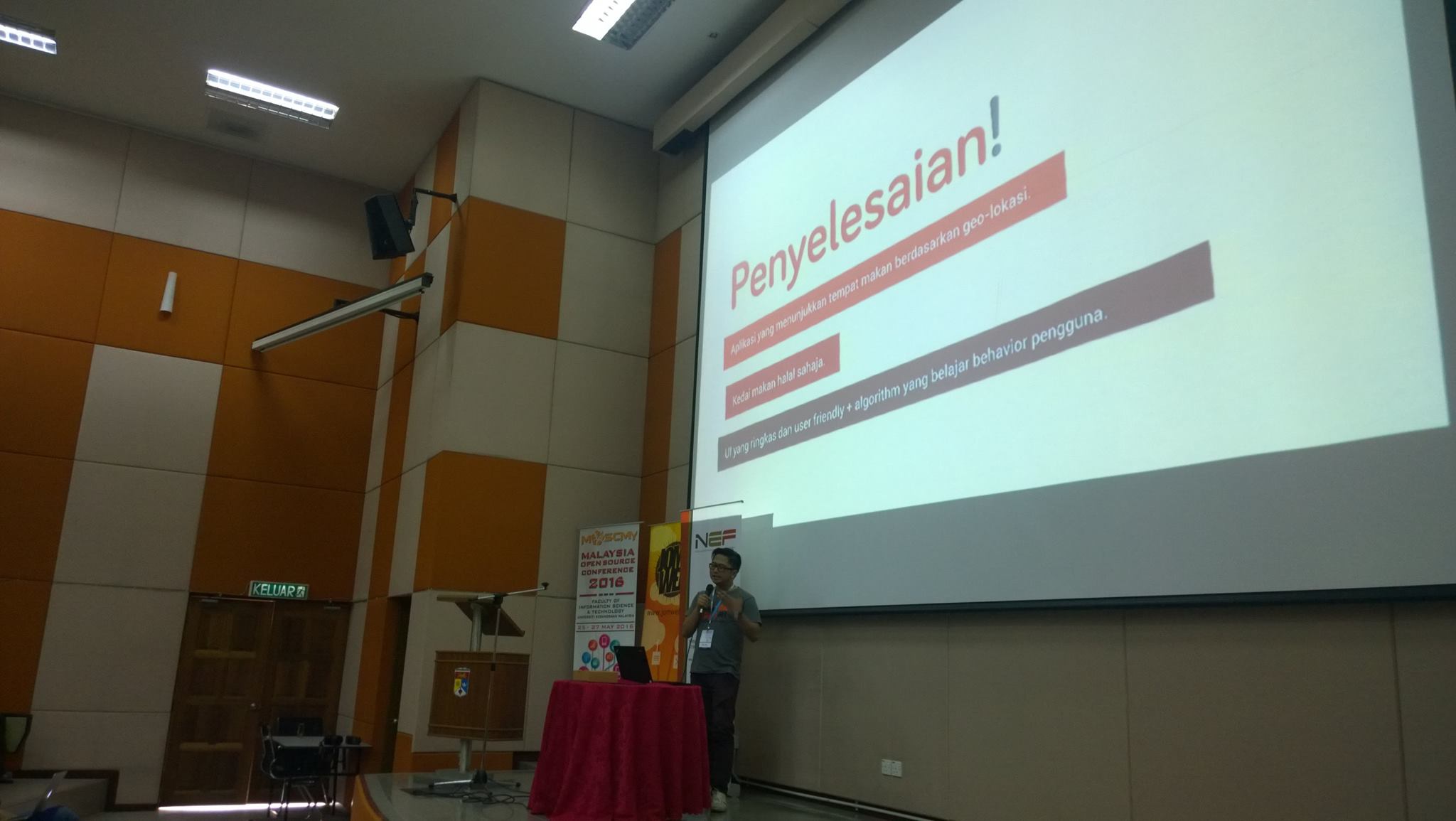 Eating out is so synonym with Malaysians to the point that sometimes we have trouble deciding where to go to eat. Recognising this problem, Afirul Afif came up with the idea of Makan Jom (Malay colloquial for ‘let’s eat’), an app for halal restaurants which can searched through locations and food choice. To date so far, the app had received lots of interest – they already have 24,000 installs so far on Google Play! 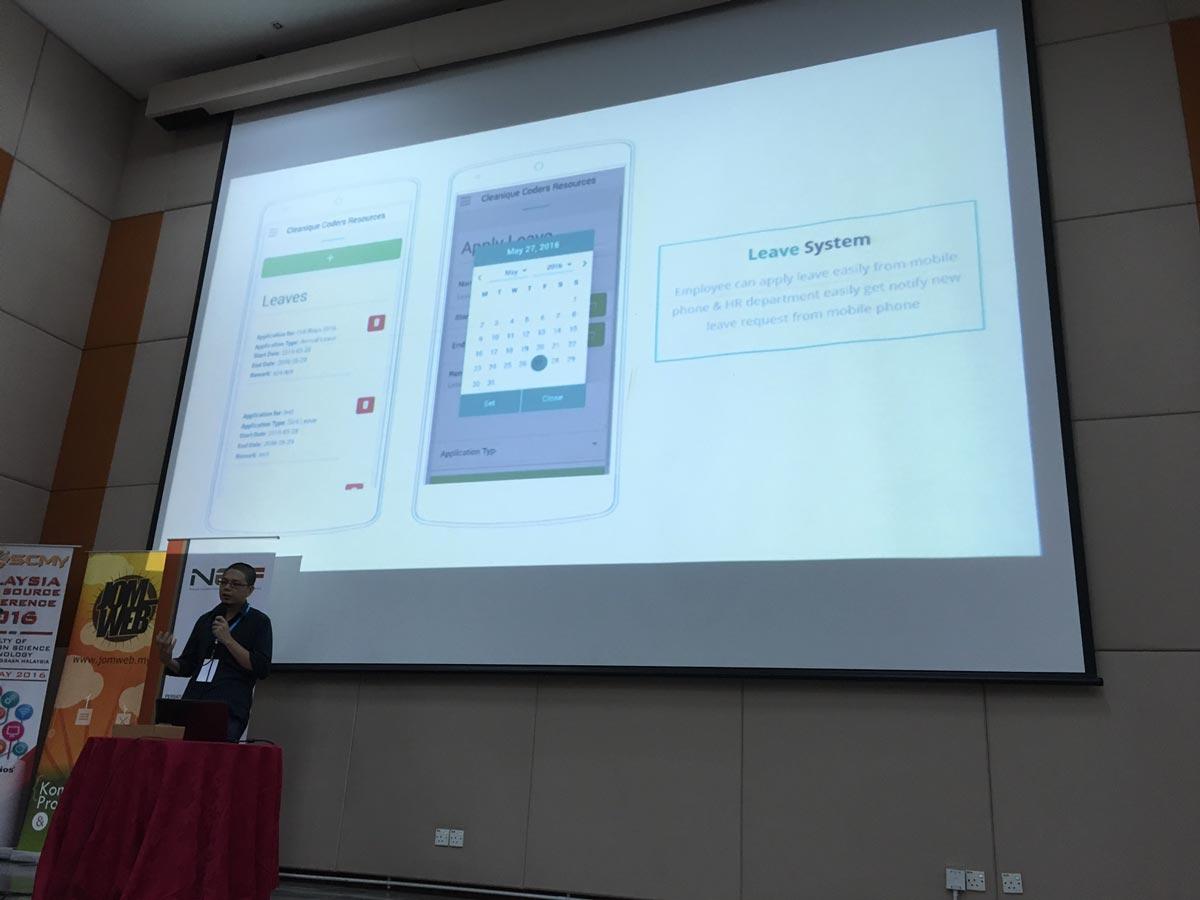 SumberManusia is a Human Resources app which could help in managing resources for multicompanies and SMEs. Presented by Nasrul Hazim, the Chief Architect, SumberManusia is hoped to be able to solve Human Resources woes in companies, providing features for leave application and approval, claims, payroll and many more. SumberManusia will also provide API for systems who want to integrate the app with their current legacy. 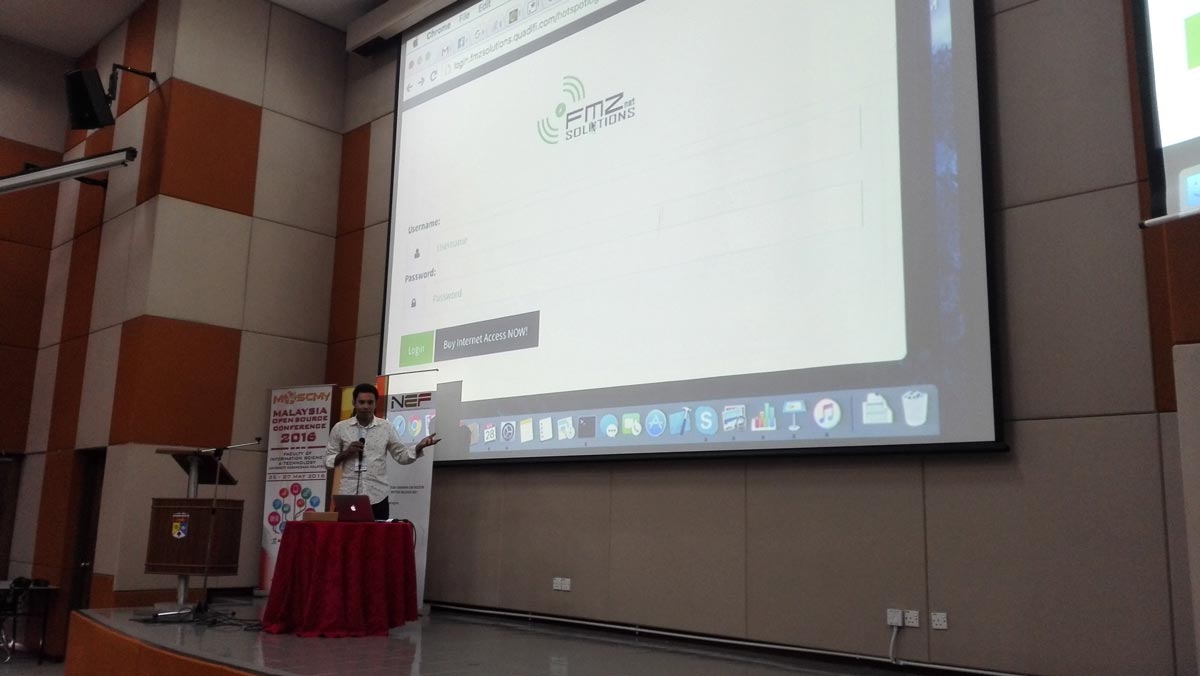 Quadifi is an interesting project – it is a Wifi controller which enables you to manage your Wifi Hotspots easily on the cloud. Currently in its beta phase, Quadifi provides an easy to use web interface and will soon come with its own plug-and-play router. An example of businesses who could use Quadifi are cafes, restaurants and public places offering wifi, paid or free. 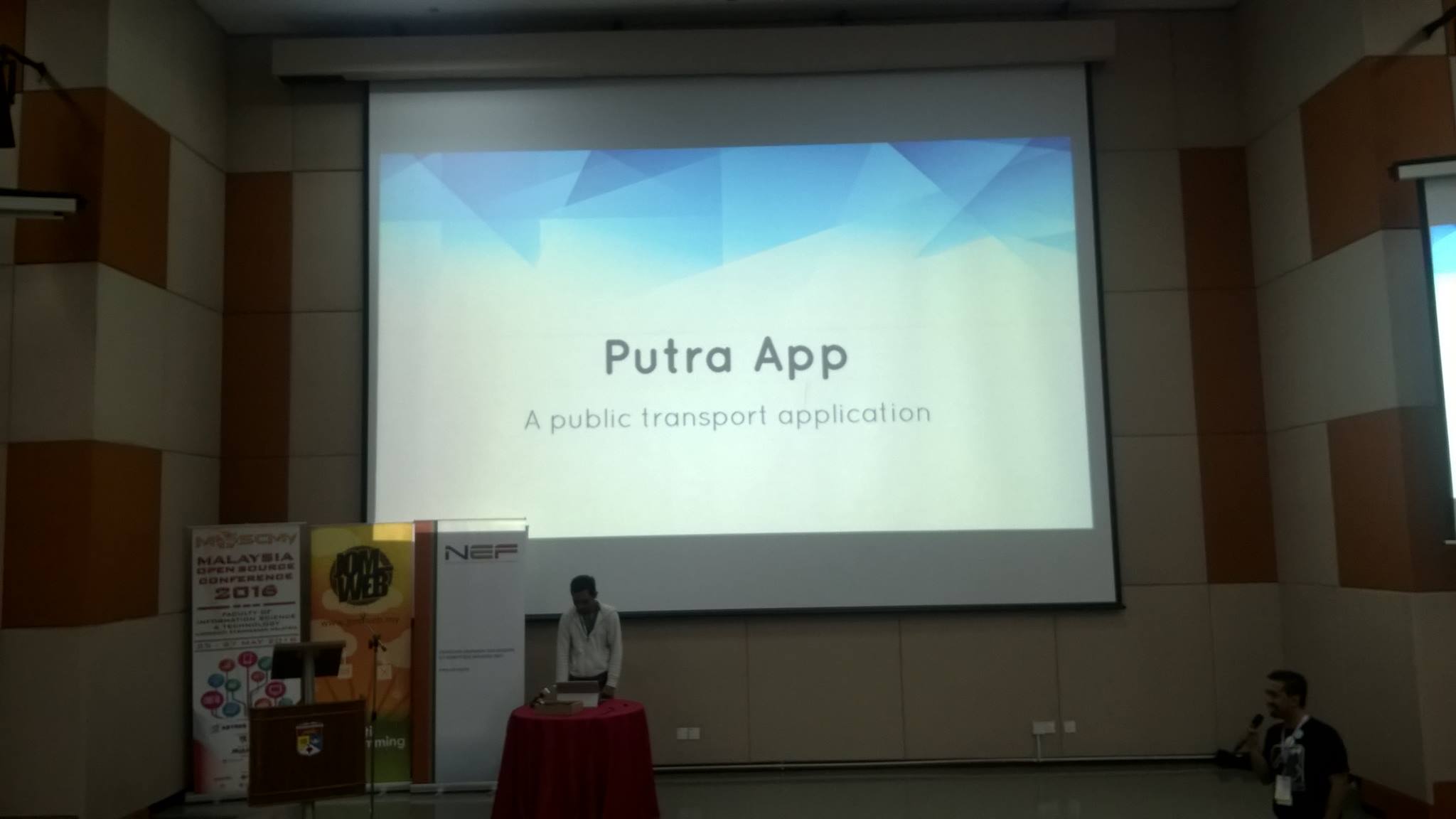 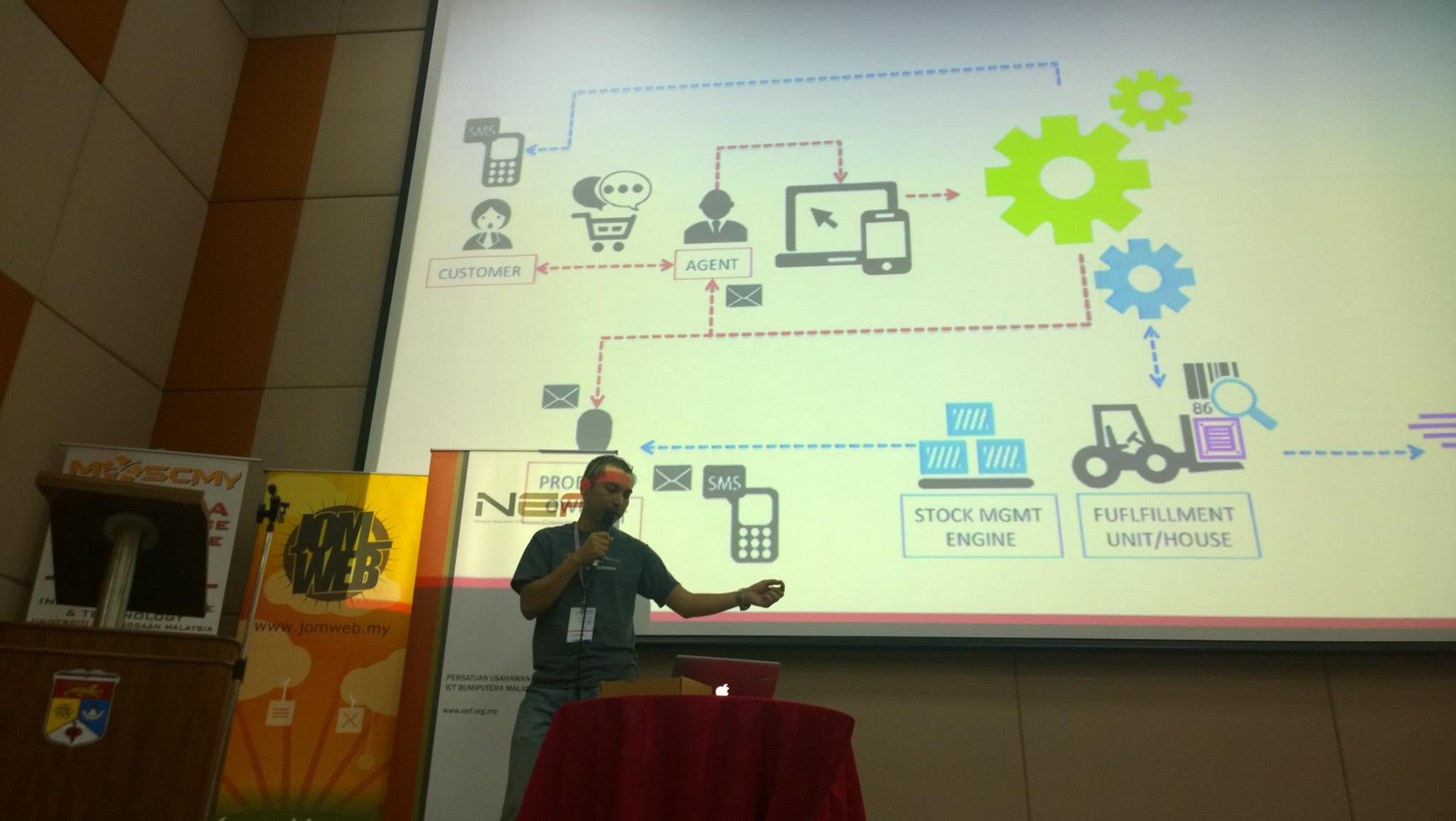 Ordervery is an online system that help to solve manual and semi-manual dropship businesses by giving them an automated system. This further allows the businesses to focus on product and new product development, and their sales team can further focus on marketing and selling activities. No more headache! 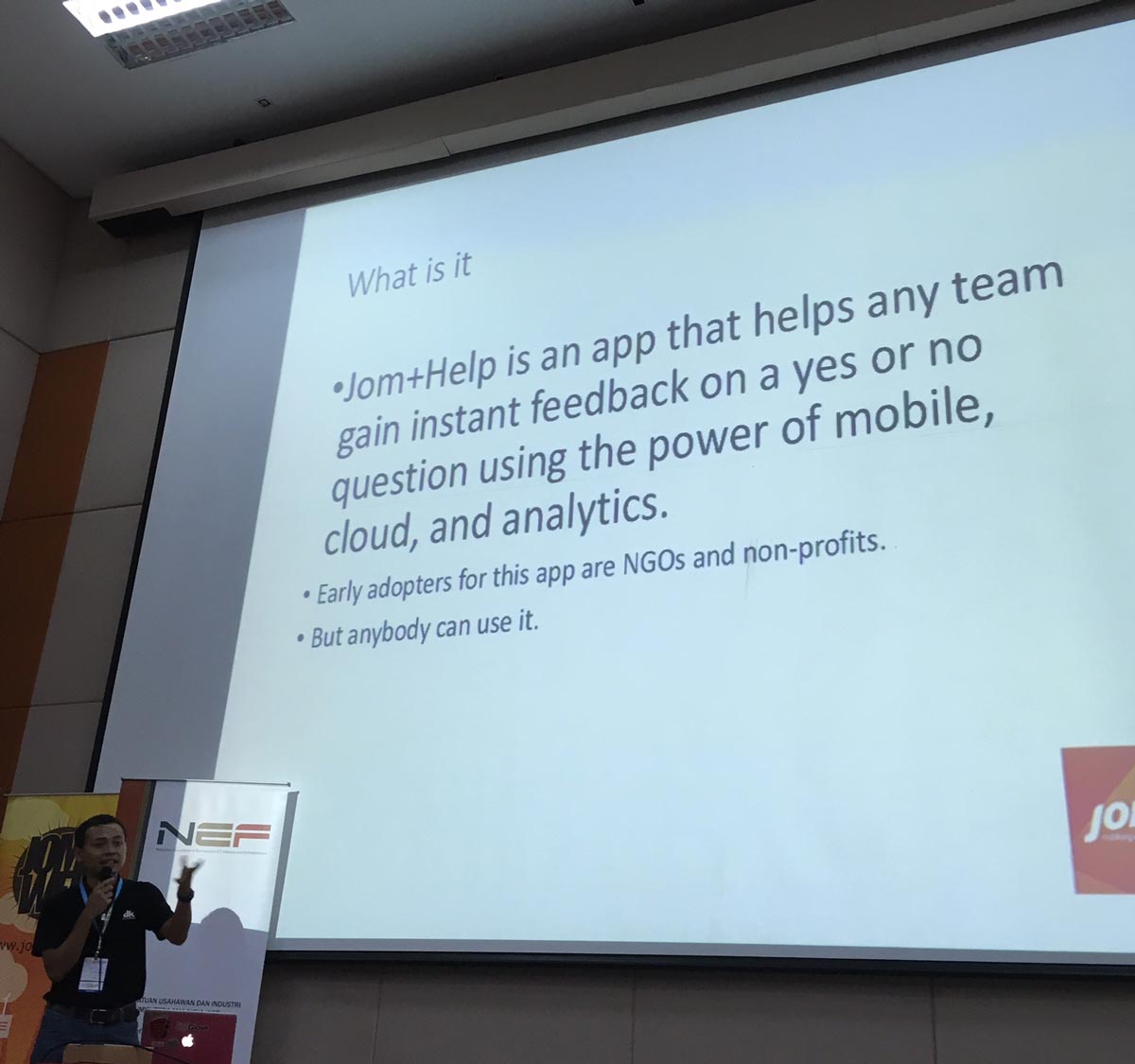 Jom+Help is a system to help enlist the help of volunteers through a Yes/No based question and answer series. Framing the problem statement through the experience of having so much headache when asking for help through Whatsapp groups, Jom+Help hopes to be able to simplify the process through its simple interface Targeted towards NGOs and non-profit organisations, there were a lot of feedback for Jom+Help, mainly requesting for the poll to be more than just a Yes/No- based question, but more towards being able to add up more options. 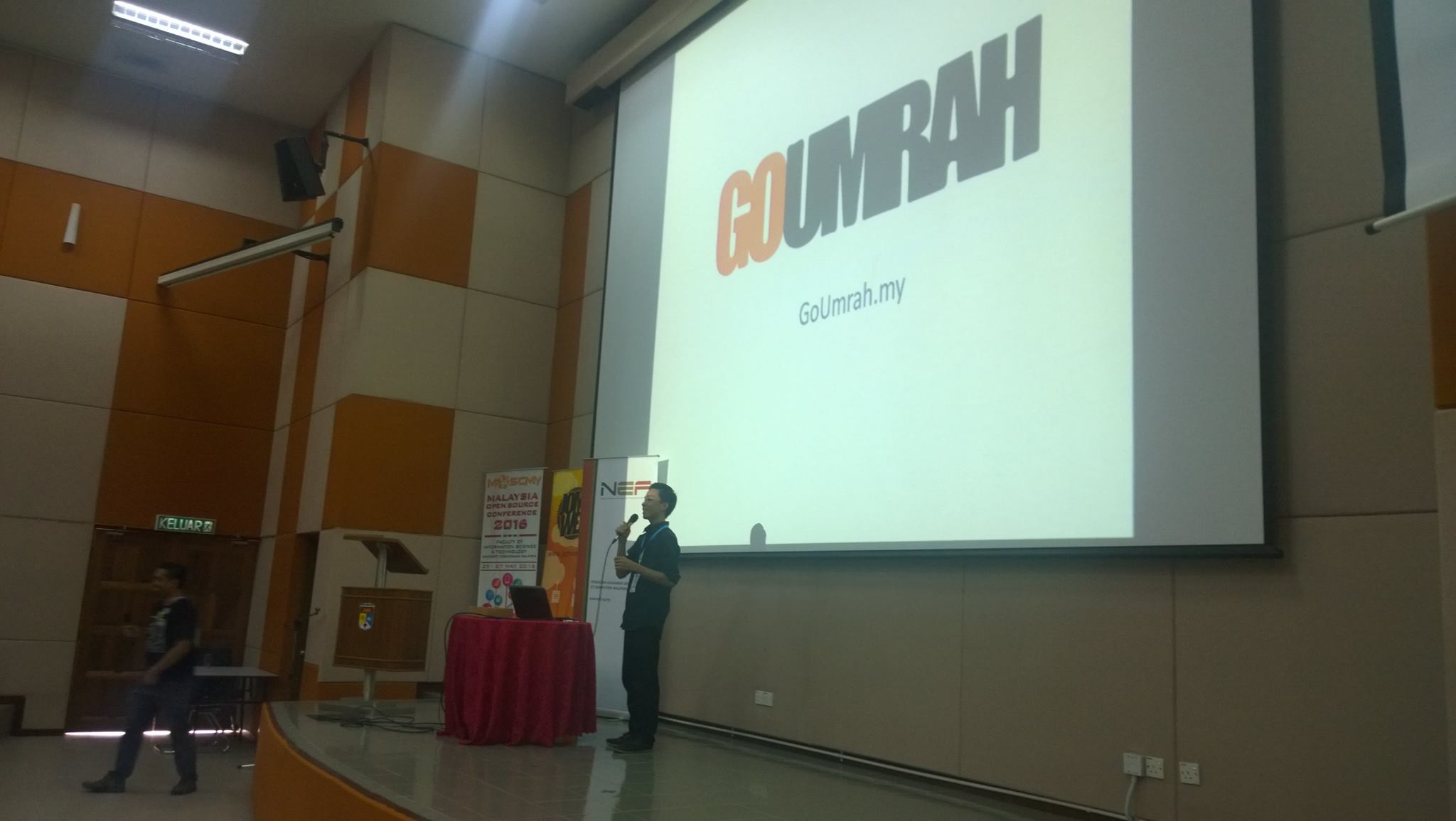 Go Umrah is basically Trivago for umrah (which is a pilgrimage to Mecca performed by Muslims that can be undertaken at any time of the year, in contrast to the Hajj). The app allows you to compare a number of umrah packages according to budget, time and other necessary conveniences from your end. There is a lot of potential for this app so we have a feeling that once the app gets a better grasp of the user experience, this app could shine. 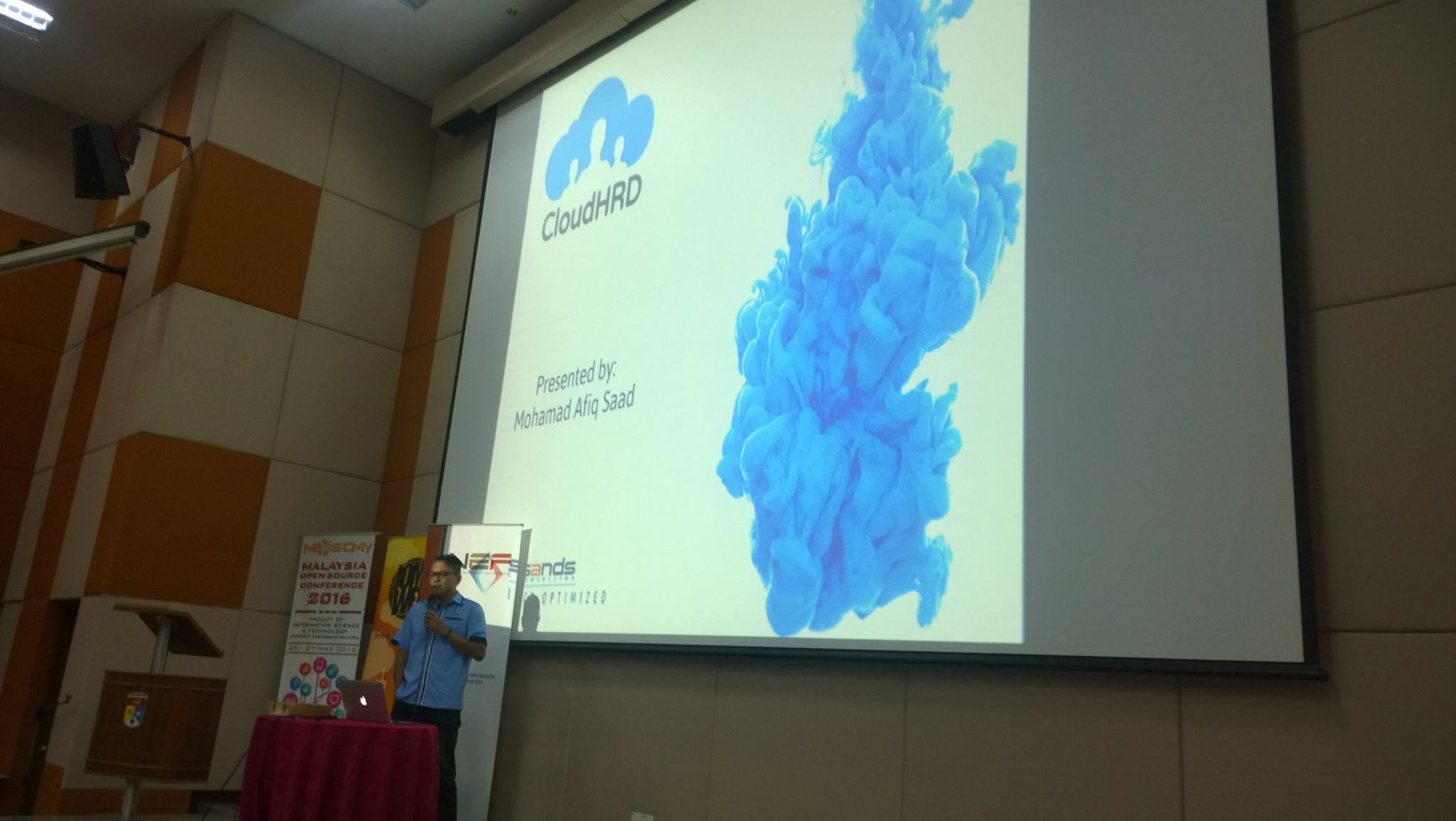 CloudHRD aims to simply Human Resources system by providing an easily accessible application of HR suite. Designed to serve small-to-medium sized organisations, CloudHRD provides features such as leave management, employee information, payroll, claims and also tasks. What’s even more interesting is CloudHRD comes with a very intuitive user interface, for example  Trello-like easy task management for employees as well as Facebook-like social timeline for employees to communicate with each other. 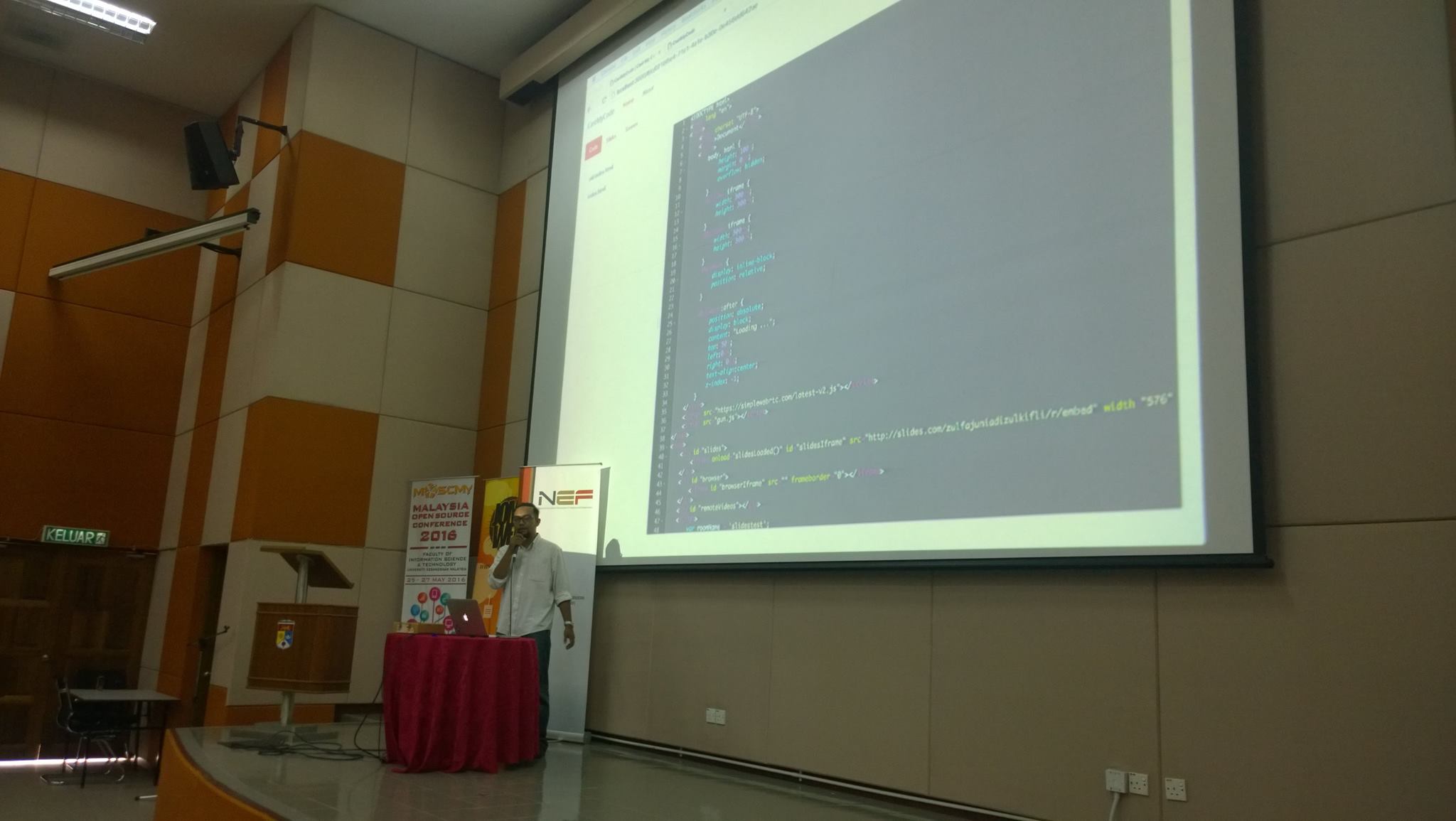 Cast My Code V2 is yet another project by Zulfa Juniadi, currently ranked as the No.3 PHP Developer in Kuala Lumpur. Always passionate about coding, Zulfa developed Cast My Code V2 as a web app for sharing code and slides between teachers’ and students’ screens in real time. In the future, Zulfa plans to polish the app with a better UI as well as allowing live video streaming between teachers and students. 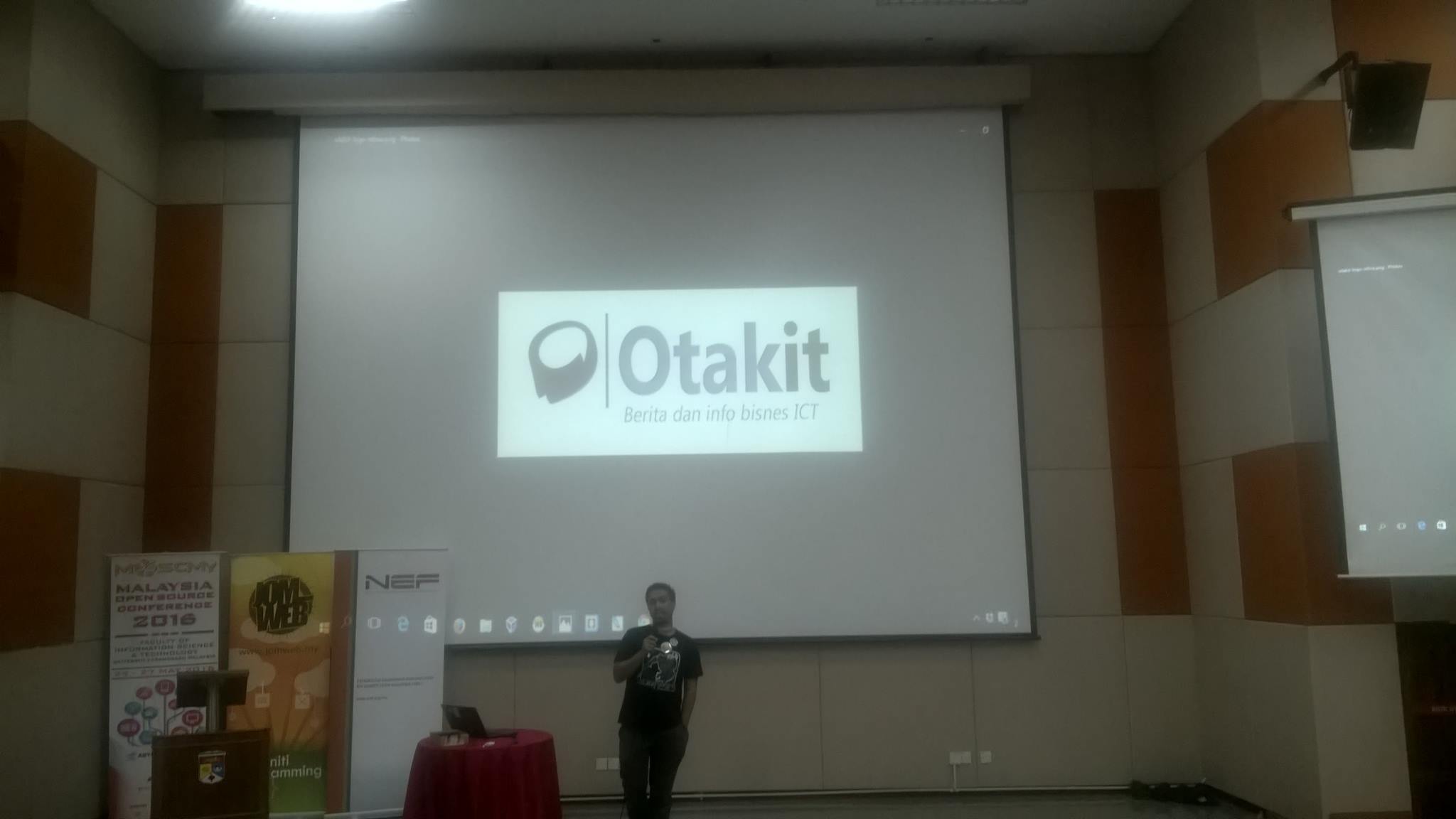 The presentations were concluded with a short stand-up presentation by Iszudin Ismail on OtakIT, an online publication revolving around the news and information in the world of web and IT in Malaysia. Fully written in Bahasa Malaysia, the platform hopes to be able to reach more Malay-speaking web and IT community. In the meantime, OtakIT is also looking for writers – so do contact Iszudin if you are interested to join!

Loosen up those muscles

Well, desk job dwellers like us – programmers, designers, writers etc. – aren’t typically know for our superior levels of physical fitness due to spending long hours in front of the screen, typing away and sitting all day. Being tethered to our machines often leads to a sedentary lifestyle for us, and a high occupational correlation with obesity. 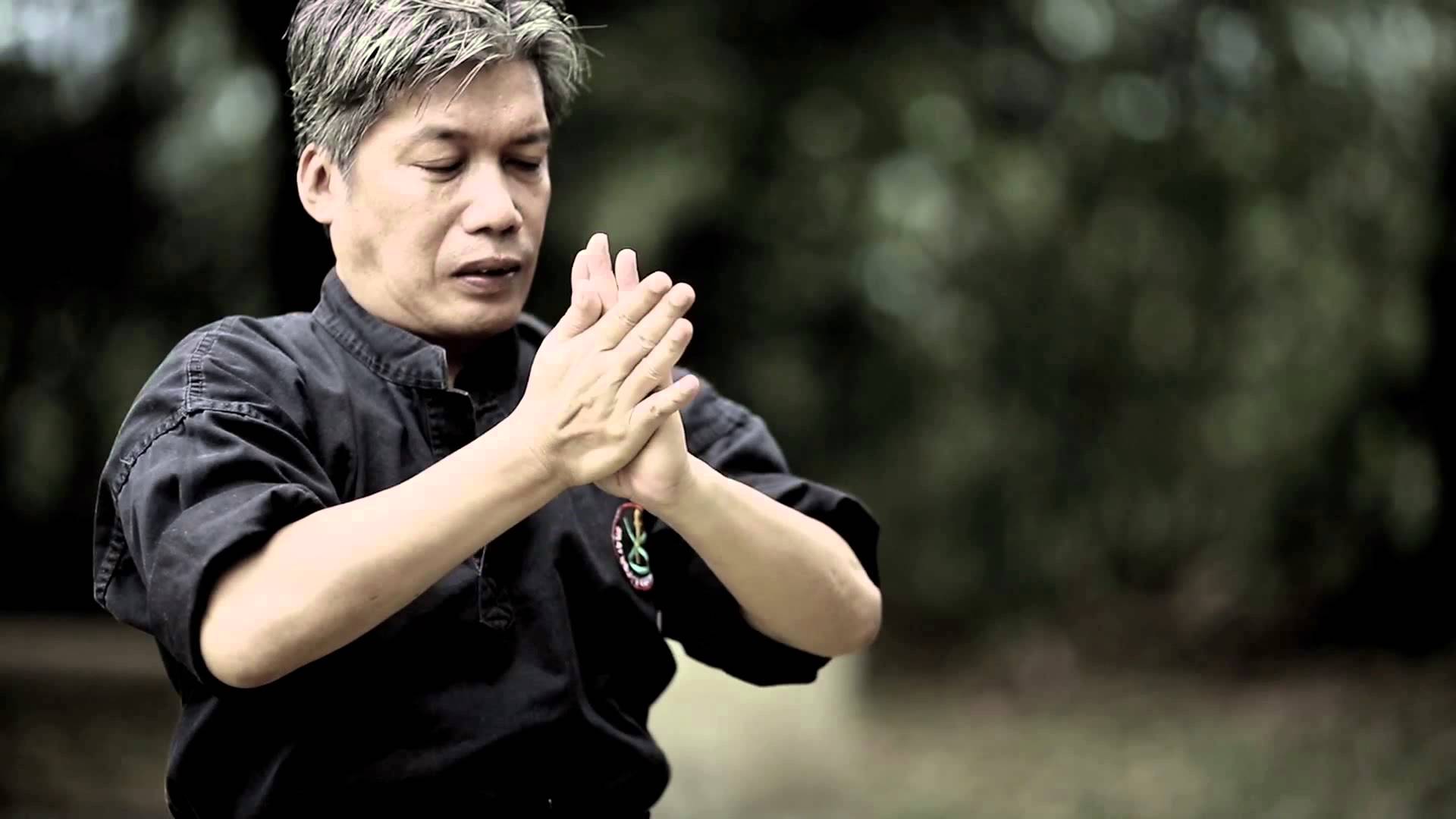 Being aware of this fact, the organisers of JomLaunch made an initiative to invite Prof Azlan Ghanie of Senaman Melayu Tua (Ancient Malay Exercise). The exercise is an ancient form of physical exercise that focuses on breathing techniques, stretches and movements to strengthen the body. Azlan had turned to this exercise form after he was suffering from a stroke at 32, which left him partially paralysed.

“Although I sought all sorts of treatments ranging from modern to traditional, I didn’t show signs of improvement. I eventually started to practise various techniques of Senaman Tua (which I had learnt from my father) and my health gradually improved,” recounted Azlan, who is also the founder and editor of Seni Beladiri, a monthly magazine dedicated to the Malaysian martial arts scene. 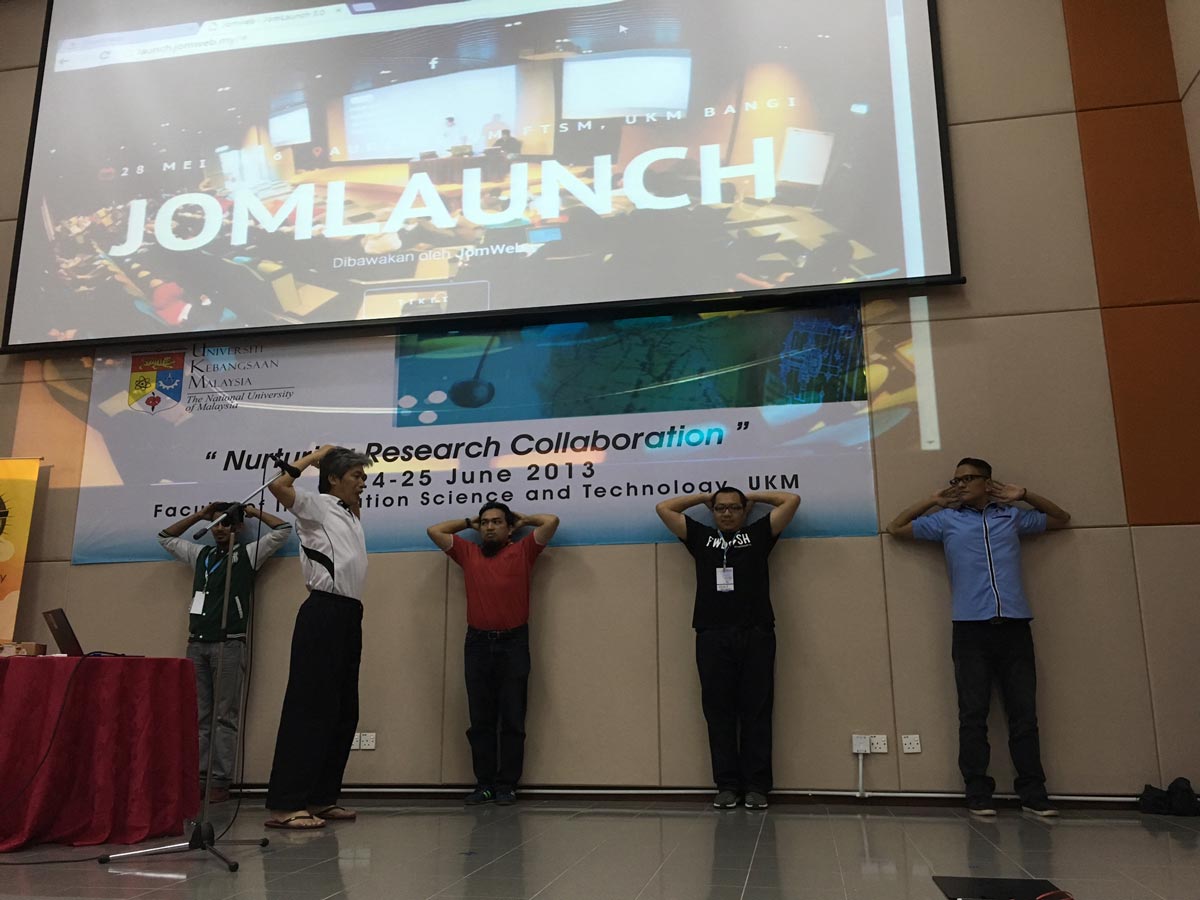 Under his quiet demeanour, Azlan, or known as Sifu Azlan to his followers, showed a rigorous demo on how to loosen up those muscles after a long day of sitting at the desk. He had some of us standing together with him to perform the exercises. Fun times!

What we also noticed is that, while the projects are very highly thought-through, the manner in which the presentations were conducted were really casually done. We could see some of the presenters were quite nervous – so the organisers cracked some jokes and that helped lighten off the stage fright. 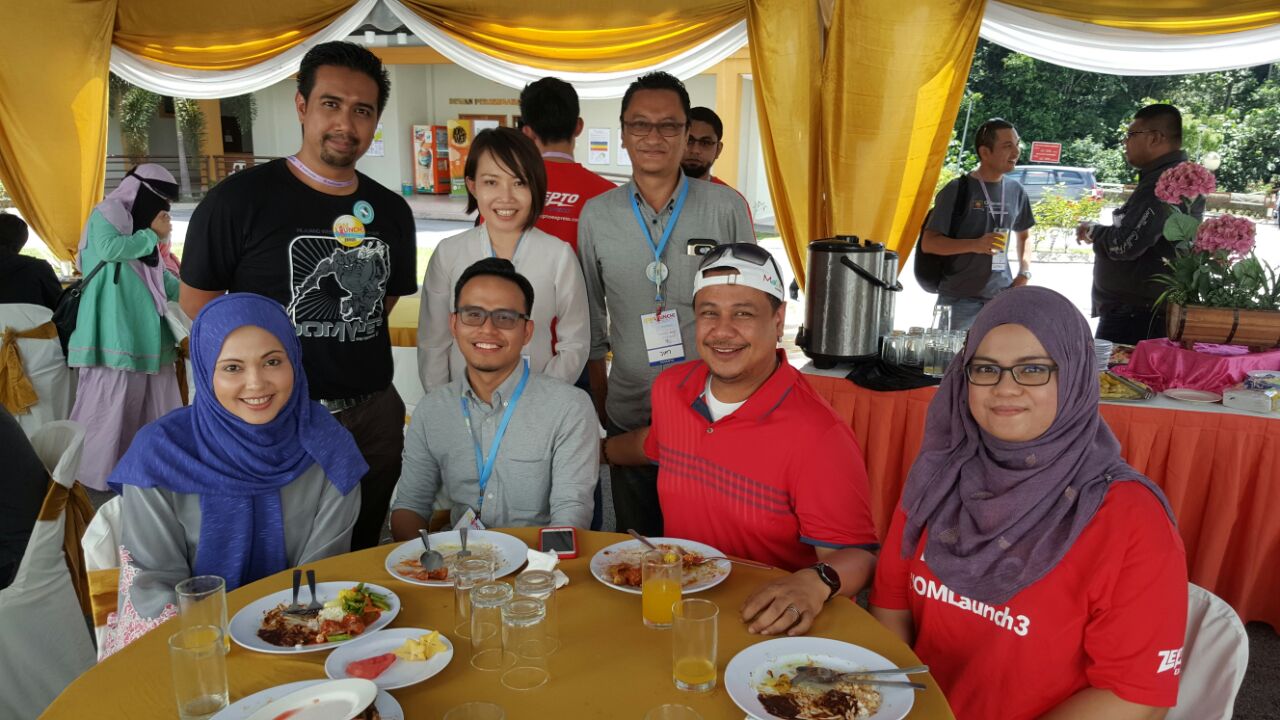 As we work remotely, we only recognise the faces of wonderful and experienced folks of Malaysian web community through their Facebook accounts and posts. Imagine our delight when we got to meet them face-to-face and discuss so many interesting things, from the Delphi days to the era of Internet of Things, over nasi campur and teh tarik.

It was great meeting everyone, and looking forward for JomLaunch 4.0!